The internet may be global, but geopolitics still make a tremendous difference to music business. In this connected world, the nation state still exerts its influence over the popular song. 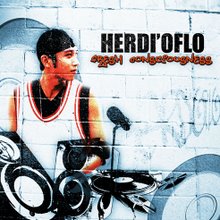 Here on New Music Strategies, we’ve looked at quirky geek-pop from a country of 4-million with a high internet takeup.

What about mainstream hip hop in a nation of 250 million but with relatively few online?

I’ve been having an email conversation this week with a rapper and professional basketball player based in Jakarta, Indonesia. He’s in the process of setting up his own label, and has been reading New Music Strategies to pick up a few ideas along the way.

Herdian Mohammed, aka Herdi’oflo dropped me a note and asked me to give a bit of specific advice. I liked the music, we got chatting, and I thought it deserved a case study on the site.

While I don’t claim to be an international business expert, and nor am I fully aware of the local context anywhere near to the extent I was with Haunted Love, I thought I’d see what I could come up with.

In the end, I just had to stop writing, rather than end up with another 96-page e-book just on this… but there’s something to be carrying on with here.

For the sake of context, have a listen to his track ‘My First Album’. This is serious, professional and genuinely marketable stuff: bilingual hip hop that would sound equally at home on mainstream radio as it does bouncing around the internet.

Of course, things are not straightforward when you’re setting out to make it big at the best of times — but right now there’s a massive shift going on in the way that the music industry operates… and the new technologies are not distributed evenly by any stretch of the imagination.

With Indonesia’s population of 250 million people, we figure that having a music career here is always lucrative and sustainable as the capital city of Jakarta alone has approx 10-15% of the total population of Indonesia.

Yet, many of us are still in the struggle especially in the genre of HipHop.

Our culture is more familiar with bands and rock’n’roll as many of the major labels here pump up their promotion money to boost up their popularity. Its always about business as the majority of Indonesians prefer to hear pop bands for their eastern taste and ears. I guess the majors created that.. hehe.. and of course they don’t want to ruin and change their business foundation and money making genres… Whereas the hiphop genre here is still very small.

That’s the vision that my partners and I are trying to establish in our establishment of our Hiphop and RnB label, HollaBack Records Indonesia.

We want to independently create a label for us and by us that focuses on HipHop & RnB music where we won’t solely focus on the conventional physical cds/cassettes promotion/distribution; artist management, tours, shows, merchandise sales, etc.. but we also want to establish ourselves and take advantage of the world of online music where we see a bigger market internationally rather than solely focus on our domestic market…

About less than 10% of Indonesia’s population are internet users. This is the reason why many musicians and artists of Indonesia have their own personal website only as brochures where doing business on the net is still very uncommon for Indonesians.

And not all musicians feel the necessity of having their own website or even exist on the world wide web. The net and e-commerce is still not the way for Indonesians to do business with another Indonesian located in Indonesia.

Traditional physical business models are about 98% of how businesses are done. And that is the reason why not many musicians here have not taken advantage for their own independency on the potential opportunities online music can bring for them. The internet is still uncommon for musicians here.

Well Andrew, this is basically where you come in… We need some pointers in taking the first steps of how HollaBack Records Indonesia needs to start in taking advantage of the world of online music. Where do we start and how should we start to create a long-term foundation for the label and its music?

Do you suggest we need our own website and create a music store or just start with a blog at blogger.com? or use MySpace, Soundclick, etc..?

How do we create sales and create money transactions through the net where sites such as Paypal.com will not do business with us Indonesians in receiving money… and what do you suggest about online music promotion, online music distribution, and online music business strategies?

The first thing I’d say would be that although Indonesia doesn’t have high internet penetration, there are two things to bear in mind:

1) Indonesia is massive
It’s the world’s 4th most populous country. And 10% of 250 million people is a hell of a lot of people. Despite the fact that 90% of Indonesia is without access to the internet, it’s fair to say from a business perspective that the 10% remaining are more likely to have the disposable cash to spend on online music. Whether those people are also in your target audience for hip hop music is hard to tell from here — but I’d say there’s a good chance that some of them are in the market for some beats and rhymes.

2) Indonesia is tiny
Even though Indonesia is one of the most populous countries in the world, the other 97% of us live elsewhere — and some of us live in places that might be interested in your music. Outside of Indonesia, the country is widely considered to be an ‘exotic’ destination, and the culture and language holds meaning for many Westerners as a far off land of mystery, lush terrain and so many beaches. There are so many great stories to tell with your music and language and yet hip hop is pretty much universally understood. This leads me to think that export might be a good strategy for what you do.

Build the website — make the music free
There’s a lot to be said here. I think absolutely a website is in order. No need to go overboard: a WordPress site (much like this one) would be more than ample for what you currently have in mind. Get some basic hosting and a domain name — in fact, both a .com and a .id would be a good idea — and make sure the hosting can be upgraded as you become more successful.

The next thing I’d suggest is to give your music away — but still sell it. Make tracks available for download, free. Get them circulating and get them heard. Encourage people to burn CDs for their friends. Put some CD sleeve artwork up online so that people can print it out and make their own cases and give them to friends. But still produce physical CDs and vinyl (if there’s a DJ market) and make the packaging and accompanying artwork and liner notes absolutely worthwhile

Make sure that the domain name is on all the artwork. Rap the URL at the beginning of songs, in the same way you give credit to Saykobeats. That way, if you get heard in passing, or played on the radio, people will know how to get their hands on more of the same.

Creative Commons
Get the music registered with a Creative Commons licence. That way you’ll be able to choose what people can and can’t do with your music. While you’re establishing yourself, more than anything else, you need fans. Let people find out about your music, listen to it, share it with their friends and become familiar with it.

When you’re dealing with that many people — especially in a place where not everyone has a great deal of money to spend — there’s something to be said for sheer weight of numbers.

Until recently, there was actually a Developing Nations licence, which I think is a pretty good idea. Under that scheme, people in a developing nation are free to transmit, copy and reproduce the work, but in a developed country, ordinary copyright applies. Where people can afford music, let them buy it. Where black market piracy is more likely to reign and take all of the profits from the artist and the label, cut the financial flow by just making it free.

Unfortunately, it seems that the Developing Nations licence has been discontinued. Here’s hoping there’s a new version soon (anyone know what happened there?)

Accepting payment
Paypal‘s still a good idea and in that respect, you’ll want to use the WordPress Plugin WP e-Commerce — but you might want to find a way to accept credit card payments, micropayments or even subscriptions.

Traditional mail-order through the site is an option too. If 98% of music business is taking place offline, you don’t want to walk away from that side of it either.

Video podcast
For a global audience, I don’t think you’ll be able to beat a video podcast as a promotional activity. You obviously know someone with a video camera. Spend 5 or 10 minutes once or twice a week showing people around where you live, take them into the studio, or to a basketball game, a rehearsal — or let them see the creative process in action. Tell them a little bit about the lyrics and what they mean to you (and translate the Bahasa Indonesian lyrics for us English-only speakers!).

I genuinely believe that an Indonesian hip hop video podcast, done well, would be truly remarkable — that is to say, it would be remarked upon, and the result would be a powerful viral marketing strategy.

If you’re not sure how to get started, here’s an easy 3-step plan.

Back to basics
First things first though. Get the label set up. Establish the website, with subpages for each of the artists (it sounds like you’re in a community of like-minded musicians, so it’s not just going to be your music on the label, right?) — and then start the video podcasts.

You’re also going to want to make the most of your professional basketball connections. Basketball and hiphop go together so well. Is there a way you could promote your music through ticket sales (buy a ticket, get a sample CD)? I assume the games are televised? Is there an Indonesian basketball magazine that could write a feature or put something on their website? The possibilities are endless — and I’m only scratching the surface here.

I don’t believe for a second that hip hop not being the mainstream popular music form in Indonesia is anything of a barrier to your success. In fact, it may genuinely help. Better to be at the top of the game in a small but growing arena, than try and enter a saturated marketplace where everyone already sounds like you do. Your difference is what makes you interesting.

Above all, it’s a matter of taking stock of your assets — of which there are many. Massive intersecting audiences, strong export potential, multimedia possibilities, a unique selling point and the chance to invite your audience behind the scenes and get to know Herdian Mohammed, Indonesia’s first global hip hop & basketball superstar.

That sort of thing.

I’d love to hear what other suggestions readers of the blog might be able to add to this… and if there’s ever a chance to come over and spend a couple of days going over some of these ideas, I’d leap at the opportunity.