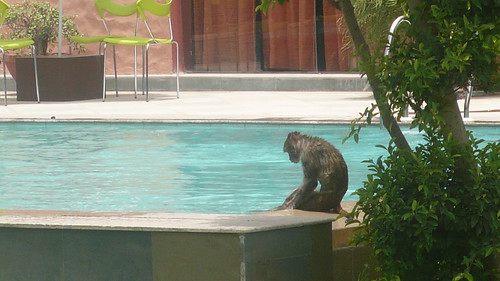 After a long series of flights, we eventually arrived in Delhi and went straight from the airport to the gorgeous farmhouse we were staying at.

There was some initial excitement when the local monkeys decided that they wouldn’t let us near the swimming pool, and chased us away – but we eventually managed to come to an arrangement with them, and I spoke to Ian about what we had come to do.

But there wasn’t too much time for swimming, as Faith and her team from Music Basti arrived to tell us about the project and how it works, and to hear what we had in mind for the recordings.

In this video, Faith and Sikandar show Ian some videos of the work they’ve been doing with the musicians, while Pattie and Nisha explain to Jez how the homes for the children operate and what happens there.

Apparently, one of the things that the children most wanted to sing about was rain. There’d hardly been any in months, and the heat was so oppressive, that it’d been on their minds all through the lead-up to our arrival.

Of course, the moment we get there… what happens?

It was torrential – but it didn’t last too long. Before we knew it, the temperature gauge was back up to around 44 degrees Celsius and we were off to meet the children.

Of course, what you’ll find in India, when it comes to initial introductions, is that not everyone’s name is easy to pronounce…

But then we were treated to a rousing musical performance by the girls. And at the end, we were even invited to join in… once it was explained to us what the song was about.

This song ‘Daulat’ was, of course, destined to end up on the final album, and is one of the real highlights of the record. That’s Niraj on guitar, by the way – and Ishani on handclaps. You already know Sikandar from our meeting above.

Next… we get busy with some recording.