Want to go viral and have fan-made videos circulating the net? Talk to the code monkeys. 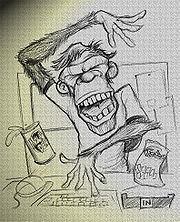 It’s a surprisingly little-known fact that if you want to get a song on the radio, you should write a song that mentions or features radio stations and DJs.

‘We Built This City on Rock & Roll’, ‘Radio Ga Ga’ and ‘Pilot of the Airwaves’ are pretty much inexplicable phenomena without that simple principle. You can probably think of your own examples.

Even songs that talk about how utterly dreadful music radio has become will get enthusiastically embraced by programmers, simply because they mention radio. Radio programmers don’t always listen too closely to lyrics.

But that same principle can now be applied to the internet, as evidenced by Jonathan Coulton‘s song ‘Code Monkey’.

All over the internet, actual code monkeys (computer programmers and web developers) have adopted Coulton’s pop tune as their galvanising anthem. And what’s more, they’re making videos, remixing culture (as they do), and are sharing it around.

Here’s the best of the bunch (via Accordion Guy, but with a quick thanks to Pete Ashton for the heads up) — made from clips taken from the Japanese anime TV series Black Heaven:

The point is that the same principle as ‘sing about radio’ is going on here. Geeks propagate geek culture, and their medium is the web.

If you want them to do your work for you, you need to understand them and you need to speak to them and about them in your music.

Unlike radio programmers, these guys (okay… we) are detail freaks and will spend hours constructing things that replicate the culture they (we) feel is important.

Whether it’s anime (as above), Buffy the Vampire Slayer, captioned cat photographs, lines of code, geek-friendly humour — or just anything that could be considered ‘cool’ to someone who depends on electronics to sustain their way of life — geeks are driven to engage with and send each other things that resonate.

Not only that, but it’ll be pretty technically accomplished as a point of pride.

So — why not release a song about PHP, write a symphony about IT support, wear a +20 Shirt of Smiting onstage… whatever it takes, right? But know your audience first.

And if you are a geek looking for a summer project, you might want to make a fan video for the Nightingales, whose song ‘Wot, no blog!’ is just crying out for it.

Incidentally, you’ll know for sure whether you’re a geek by whether or not you are compelled to send the above video to another person, link to this page, or embed the YouTube clip in your own blog.