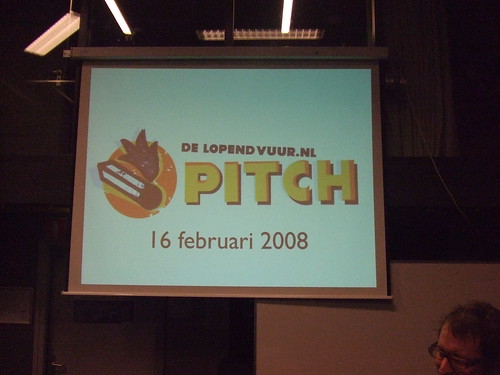 I’m in Leeuwarden in the north of Holland today to make a keynote presentation at the Lopend Vuur pitch. Lopend Vuur literally means ‘walking fire’. It comes from a Dutch saying about how rumours are spread – in English we’d probably say ‘like wildfire’.

Over a hundred bands from around the Netherlands applied to be in the Lopend Vuur pitch, and five were selected. Those five bands are being individually mentored and coached by new media-inclined industry experts, to help them get a story, a business plan and a strategy together so that they can make a case for investment. I’m not one of those experts – but I get to deal with all of the bands and their experts together.

Today, after my presentation, they get to sit down and finish working up an initial business pitch to a panel from Sony BMG. But they’re not after a major label deal. Sony have agreed to work with the successful band in a partnership arrangement – not as a ‘signed act’.

They will give the successful band a 20,000 euro investment (not an advance), the band will implement their plan, will keep their master recordings, and the split with the label is a straight 50/50 deal. Sony will weigh in with their marketing muscle and help the act where it’s needed, but the relationship is (ostensibly) as equals.

Now, of course, you can easily unpick that and make the obvious point that if they can get a new, innovative business plan together that’s convincing enough for Sony to give them 20,000 euros, then they could get that investment from elsewhere and not forfeit half of their revenue. But there are two things that make this really work from my point of view.

1) It’s the first glimpse of a major record label being prepared to take in potentially radical business ideas to try and filter some new ways of working through into the organisation. I read this as a positive thing.

2) Artists who have released records are still often immensely frustrated by the problems they have doing it without a label. It can be done – and it can be done very well – but there are access to marketing and distribution channel issues that, if you want to be ‘famous’ and make decent money at what you do, are far easier to solve with the assistance of people who are professionals in that area – even if they’ve lost their way in the new media environment.

In other words – you want a major record label deal? This is by far the less odious way of doing that.

1) They need to think about who their audience is
I’m not talking in this instance about their fans. I’m talking about the people to whom they will be making this pitch. What are they looking for? What can we offer them?

2) They need to be bold
This is not a cap-in-hand plea for a handout. This is a surprising and innovative new venture that Sony is invited to participate in. If they choose not to take up the offer, that investment opportunity goes elsewhere.

3) They need to retain some basic marketing wisdom
So many of these bands seem to have forgotten what their USP is. They need to figure out what is different about them, and communicate that as clearly as possible. I pointed out what I think is the fairly glaring issue that none of the bands ever sing in Dutch. They believe that it would reduce their chances of international acceptance. I have a fair bit to say about that.

And I wrapped up with some general points about the new media environment. Hear / Like / Buy, distributed identity, not using your website as a brochure, building relationships, rather than just making sales… that sort of thing.

The sort of thing you already know about, because you read this website, right? 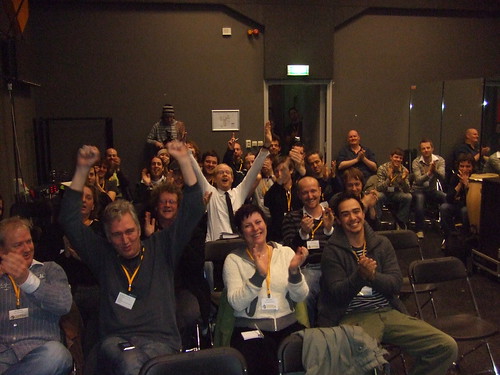 So… the keynote presentation went quite well, and was warmly received. One of the crazy/cool things about this event is that the people here are quite net savvy. The guys behind the pitch have set up what they call a ‘Twitter fountain’ on the Lopend Vuur site, and so people in the audience who twittered during the presentation and throughout the day have their thoughts, quotes and observations appear in a really cool graphical way on the site – overlaid on photos from the event.

I’m spending the rest of the day walking from room to room in the Academy of Pop Culture here in Leeuwarden, dropping in on each band as they work with their mentors, dropping what should theoretically be nuggets of wisdom about their plan, and how they should be pitching it.

Of course, because when I go into these rooms to listen to what they have to say, they’re (quite rightly) speaking in Dutch, I’m not sure how useful I’m being. But I’m having a great time.

Best of all, the presentation was filmed, and I’m going to be allowed to put it up on my website once it’s been edited (it was a 3-camera shoot). Now, I’ve never seen myself present, so I’m a little apprehensive about that, but chances are you’ve never seen me present either – so hopefully there’ll be something in there you might find useful.

I’ll put that up as soon as I have it.

And the other thing that I got out of today is that I am completely sold on Keynote over Powerpoint. Despite being a Mac user and a regular presentation-giver, I hadn’t used it till today. I’m never going back.