Five websites that help you encourage people you don’t know yet to share their love for your music with people they don’t know yet. 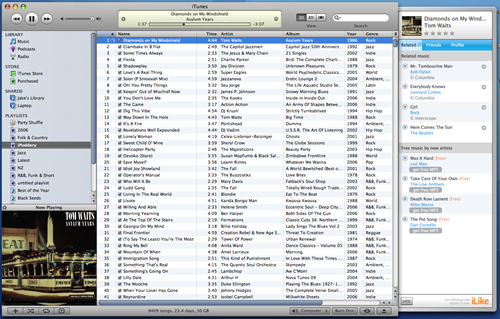 “Sharing music” is a phrase loaded with connotations. To the corporate record industry, it is the activity that separates customers from thieves, and the spanner in the works that threatens to topple an empire. To music consumers, it’s the next best thing to do with the stuff after listening to it. And while sharing music itself may be problematic from a rights perspective (in the legalistic ‘property rights’ sense, rather than actual or ‘natural’ human rights), the internet seems to be very much in favour of music as a platform for sharing and social interaction.

Let’s be clear then. A shared song is a recommended song — and as we’ve learned, the cycle goes like this:

That’s the order it happens in, and it’s self-perpetuating. You want to jump in on that cycle and let people share and hear your music so that they’ll like and buy it — and share it again.

You’re no doubt aware of websites like MySpace and Bebo — online social networking services with a music element to them. Well there’s a handful of sites that are online music services with a social networking element to them. The best thing about them is that they recommend music that is like the music that the site’s members already listen to, specifically based on their individual listening preferences.

In other words, if you load your music up to these sites, there are listeners guaranteed to like music that is compatible with the kind of music you make, and each site gives you an opportunity to get that music in front of another community. They all work differently, and they each take a little bit of playing around with, signing up, building profiles, making friends and uploading music. There’s nowhere near the membership figures on any of them to rival MySpace, but on these sites, it’s all about the music.

Here are five of the best:

1) Last FM – perhaps the best of the bunch, as it allows record labels and artists to upload their own music and inserts their songs into the personalised streams of the kind of people most likely to enjoy it. Wiki-based artist profile pages, so you can upload loads of helpful information about your music, and easily meet and connect with fans of similar artists.

2) Mog – automatically builds a personalised page for its users based on the music they listen to, as they listen to it. It has full blogging functionality and is a very good way to make connections with people who like compatible music — but, more importantly, makes it clear as to who the opinion leaders are (hint: they’re the ones you want to impress).

3) Qloud – a music search engine with a built-in streaming player, social tagging and networking, and e-commerce. At first, a little difficult to fathom, but with a bit of sustained input, tracking down influential and musically compatible users should be easily achievable.

4) MyStrands – a personalised music discovery site. Built-in streaming on demand of short snippets of songs and a particular focus towards finding out about music you might otherwise have missed.

5) iLike – certainly the prettiest of the bunch — and, for iTunes users — certainly the most well-integrated. As you play music, iLike suggests other music you may like, provides short samples of each of those songs for you to listen to should you so wish, and also comes up with a handful of free mp3s you can download that will suit your tastes (another hint: being the provider of one of those free mp3s is A Very Good Idea) — all in a special sidebar in your iTunes software, as pictured above.

Using iLike, I played a Tom Waits song, and was offered music by Bob Dylan, Leonard Cohen, Beck and The Beatles (which actually makes a weird kind of sense) as well as free music to download by Led Man, The Low Anthem, Mike Maves and Dan Costello.

I chose The Low Anthem, and was presented with a 160kbps track from their self-titled album. And you know what? I think I like them — and I would never have heard them otherwise.

See how this works?

Each of these sites requires registration, and the installation of a clever bit of software. Engagement in these sites may not be a high-yield activity — at least not right away, but as far as planting seeds goes, it’s an important maintenance activity for independent labels, promoters, artists and listeners.

If you do decide to use any of these, make sure you add me as a friend. You’ll find me under the user name ‘adubber‘.

I’m looking forward to the launch of Flukebox to see how it measures up.