Hooray for the music biz!

I went to the Gigbeth conference on Thursday, and met some very nice people who had a range of things to say about the music business and technology — ranging from the insightful to the hilarious. 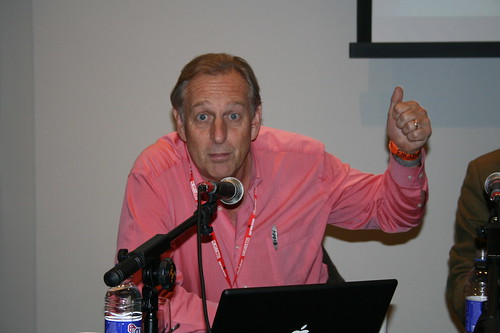 Gigbeth is billed as The UK’s most diverse music festival. Well, perhaps, but the interesting bit (at least for my purposes) is what happens to the conference that kicks it off as a result of its connections with the Learning and Skills Council.

A mix of music industry professionals and music educators all end up in the same room together, and have some conversations that, in almost any other context, would completely fail to take place.

I was involved to the extent that I was on one of the panels, and chaired a rather interesting and controversial session in which six teenage girls (young teens, that is — 14 years old for the most part) discussed their music consumption practices. In short — they download, listen for a bit, then delete. Typically no money changes hands.

What really threw the music industry people was not that these girls were downloading music ‘illegally’ — but that it was of so little value to them, that once they tired of a song, it was entirely removed from their digital media and their lives.

One girl had a CD collection. Sixteen discs, and not one of them had been purchased in the last three years.

However, interestingly, when asked what they might be prepared to spend on regular live performances that they could attend where they’d feel safe and their friends would also attend, they had no problem imagining a Ã‚Â£10 spend every couple of weeks.

Their reasoning:
– Yeah, but that’s different isn’t it? What we download — that’s not really ‘music’, is it? I mean, it’s not worth anything. But going and seeing live bands with your mates — that’s an experience…

The girls were asked an array of questions from the floor, regarding their preferred type of music, the devices on which they listen, the ways in which they discover music, and what they thought of music as a career.

I was particularly interested in the fact that they seemed to believe that fame was the endgame of the music industry. By listening to music, they reasoned, they were helping someone get famous. Famous is better than money — and besides, you can get money easily if you’re famous anyway. Downloading music was an analagous activity to voting for Big Brother contestants.

And for the kinds of music they liked — perhaps they weren’t too far off the truth of it.

Astonishingly, one music industry traditionalist (though not, as it happens, the former BPI Executive Chairman pictured above) posed the following question to the panel of teens:

“So, let’s say one of your friends is caught downloading music. And let’s say they and their parents go to court. And they’re found guilty of breaking the law (which is what you’re doing). And they have to pay thousands and thousands of pounds, and so they have to sell their house. And they lose everything. Everything. They’re poor, and they’re miserable. Would that make you act differently and pay for music?”

Translation: if we’re really big and scary, sue everyone, make examples of your friends and ruin people’s lives, will you then finally behave in the way we want you to?

Jaws dropped. I had been expecting a reasonably antagonistic question from this particular delegate, but this floored me. I thought ‘My God – these poor girls. What have we got them into?’

Their response was interesting: they laughed at him. Honestly. They laughed.

-You can’t arrest us all!
– What rubbish.
– That’s so stupid. Why would you do that?
– Wouldn’t change what I do at all.

What struck me as interesting (and heartening) was that pretty much everyone in the room — including all of the other record industry people I spoke to — were quick to distance themselves from the position of the lone voice still trying to terrorise music consumers into submission. In fact, it was made plain just how repellent that position is when you see it in cold daylight like that.

Even those ideologically sympathetic to the record industry lawsuits against filesharers shifted uncomfortably in their seats while hellfire and brimstone was being unleashed on these quiet, unassuming young schoolgirls.

Wishing misery and suffering upon the families of some rather polite young visitors who had come to share their consumer experiences with those who would seek to make them their customers was not widely embraced. To some, it seemed pathological. To others, embarrassing. Most were appalled.

Now, these girls may or may not have been representative. They came from the same school, hung out in the same groups, listened to similar music, and seemed to have the same relationship with music education (“it’s just keyboard and it’s BORING!”). But what they had to say was instructive — particularly since it quickly became apparent that nobody in the room had ever bothered to ask them (or others like them) before.

An industry so out of touch of what their consumers actually do is headed for marginalisation, and rightly so.

I’d like to get a panel together of sixty — or six hundred 14 year-olds. From different schools. In different cities (or even countries). With different tastes in music. I suspect the overall effect would be the same, but it’d be nice to get to prove it, and I think it would make a point that most of us have just been theorising for some time: the tide has shifted. Everything is changing. You can either find a way to ride the wave, or be completely engulfed by it.

Because these girls were not just young contemporary pop music consumers. They are also the music purchasers of the future, of who knows what genre. And to them, recorded music is just moving air.

T-shirts? Concerts? Actual engagement with the artists? All of value.

I hate to say this — but in the face of everything I’ve said in recent weeks about flat-taxed music, these girls provided the best case I’ve yet come across for an approach to charging for music as if it was water. Not only did they turn the tap on and off at will, they were perfectly happy to drink from it — and equally happy to let it run out the plughole when they were finished with it.

Hmm… perhaps my position needs a rethink to allow in even more complexity?

But at any rate — that half hour of discussion with those six girls provoked a conversation that lasted throughout the day.

The panels were, thereafter, divided into ‘Learn’, ‘Create’ and ‘Consume’ — and I was on the Consume panel. I would have loved to drop in on the others, but the conversations that took place in our room were fascinating to take part in, and ranged broadly from new music services to the ways in which independent record stores can thrive (hint: coffee). 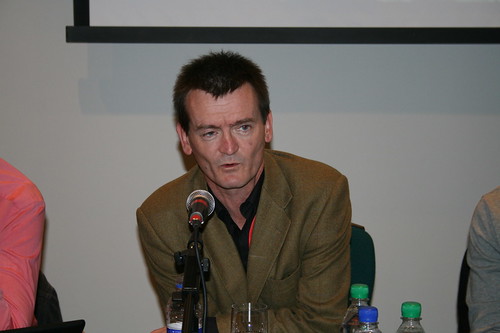 Feargal Sharkey discusses Adam Smith, primary schools and the fact that a good harpist, these days, is hard to find

Of course, one of the great things about the day — and about Gigbeth itself — was the list of cool and important music people in attendance. I had the pleasure of meeting Ruby Turner, Nizlopi, Feargal Sharkey (who now has the ear of the highest policy-makers in the land on matters of creative enterprise) and the best and brightest from an array of independent music companies from around the country.

We in the UK have cause for hope. Feargal’s report from government is that while it may not go as far as one might hope, the British Government have for the first time considered the creative sector in its latest education white paper. Not as a flavour set of subjects, but as being genuinely of value alongside the other humanities and the sciences.

It’s not about WHAT people learn… but HOW they learn, and the fact that they learn how to learn.

To my embarrassment, I had no idea who Peter Jamieson was when we sat down to breakfast together and discussed New Zealand, music from the 1970s, hotels and retirement options (yeah, I know… early days yet). I found him to be a thoroughly pleasant human being and very good company.

I might have had certain different preconceptions had I known that this was the man who presided over the BPI during its most rigorous period of using lawsuits seemingly as a desperate revenue-generating strategy.

But at the end of the day, having been cured of my ignorance about one of the most important and powerful men in the British record industry, I spoke to him about the filesharing lawsuits. His take was noteworthy:

– They were useful, and I think we had to do that, But they’ve served their purpose. We shouldn’t be doing it anymore.

I disagree with the first part, and I told him so — but I’m delighted to hear the second part.

I’m also delighted to report that Feargal Sharkey has returned to the corridors of power with a copy of the 20 Things in his satchel, and that while I was rubbing shoulders with the UK’s most diverse music conference attendees, the 20 Things e-book’s translation into Chinese was being completed.

I received a draft copy in my email, which I checked compulsively during the wine reception at the end of the day. I’m so grateful to Tze-Ern for that, and I look forward to being able to announce its release (again, free to download, of course) in the very near future.

My one real highlight of the event though, was also a bit of a red flag that something is amiss. Despite the strong educational slant to the day, as far as I could tell there was only one high school music teacher in attendance. That’s a real shame because there were so many good ideas, contacts, and influential people.

But the reason it was a highlight? The one who bothered to show up is my son’s music teacher — and he was engaged in the debate, putting the hard questions to those who can make the difference, and advocating passionately for better and more robust music education.

This makes me happy.

Hooray for great teachers. Hooray for progress. And hooray for the music business.