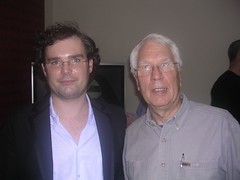 I spent the day at a Music Tank event in London, centred around Peter Jenner’s somewhat controversial ‘Big Labels are F**ked‘ Report. That may not be its official title, but it’s catchy. Jenner was there as keynote speaker (pictured here with report co-author Matthew Brown), as was a fair representation of the local (London) music industry and digital music stakeholders.

Representatives of Rough Trade, Warner Chappell, Emap Radio, Nokia, MCPS-PRS, AIM, Music Managers Forum, and (even) Sony BMG made the delegates list, as did New Yorker Anthony Volodkin of the superb Hype Machine mp3 blog aggregation site, and a fair scattering of independent music businesspeople. I even got to say ‘hi’ to Jona Lewie and Billy Bragg. I digress.

My head is still swimming and I have fifteen pages of notes from the day, but I thought I’d reveal what I thought was the most interesting occurrence of the day, and deal with the other stuff in days to come.

Music Week editor Martin Talbot was pushing his barrow about the magazine’s Extend The Term campaign to push British Copyright Law down the path of blanket copyright extension. The argument was that such a move would protect the interests of artists and music companies, and incentivise creativity.

Of course, that’s complete nonsense, and he was told so in no uncertain terms by his co-panellist Professor Martin Kretschmer — whose ‘I Am Right And You Are Not So Shut Up’ debating style won considerable admiration from the room.

The extension of copyright, as you know, shuts down creativity and locks culture up in a legal cage for the benefit of an entire generation of lawyers and a very few corporate interests. It’s not only bad for consumers and artists – it’s bad for music as a whole. I may have said so out loud.

The woman who manages Gotan Project went further to say that in fact all of copyright is broken. Forget extending it – throw it out and start again.

Talbot’s cause was then taken up and supported by IFPI representative Ute Decker, who made the case from the point of view of the international organisation, which — after all – acts in the interests of the entire Phonographic Industry. Copyright Extension was good, she said. It advanced the cause of starving ex-Beatles everywhere, cures puppies of cancer, and rids the world of unwanted hippies. Again, I may be paraphrasing.

And so a show of hands was taken.

Not one. Not even Sony BMG chief Ged Doherty was fooled.

So who in the room agreed with the idea that copyright was completely and fundamentally broken, and should be scrapped in favour of something entirely new and built for purpose for the new media environment?

Pretty much universal assent (though actually, Universal weren’t there).

But the message is clear. If that room was a representative sample of any kind, then NOBODY wants copyright extension. The organisations purporting to look after the interests of the industry and report them fair and true should sit up and take note today.

Free Culture over corporate grasping, thanks very much. The industry has spoken.