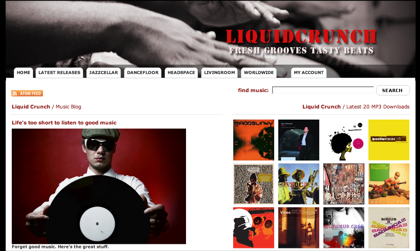 One of the areas of music business I’ve always been interested in is retail. The romantic notion of owning a record store and being surrounded by so much great music all day is really appealing. As, of course, is the idea that your opinions about music will be sought and respected.

The online environment has given me an opportunity to experiment with that – but without all of the headache of stocking, shelving, cataloguing, orders, returns and the general day to day business of running a physical shop.

Using ithinkmusic.com – a rather clever, artist-friendly and independent label compatible music retail platform based in London – I have built Liquid Crunch – an online music store with a bit of a difference.

First, Liquid Crunch does not boast a wide selection of anything.

There are five basic categories, which I’ve tentatively tagged JazzCellar, DanceFloor, HeadSpace, LivingRoom and WorldWide. In each of those categories, there are ten releases for sale. They’ve been picked by a panel of music specialists, tastemakers, DJs, consultants, etc. People I know whose opinions in these matters I really respect. And I’ve had my say as well.

I think people are overwhelmed with choice a lot of the time. And I think that’s a great thing. I personally think iTunes should stock 100 times what it currently has available, and the labels should be uploading the entirety of the Long Tail as fast as they can find the master tapes and digitise them all.

But when it comes to new and unfamiliar music, 6 million songs is too many to choose from. You won’t even start. But if you want some music to just chill out to, have a bit of a boogie and be a bit sophisticated, we’ve installed a very good filtering system.

And shortly, I’ll be inviting some rather well-known guest tastemakers from that end of the music scene to select their ten best picks for the site too.

Second, I’ve built in what I think must be the world’s first money-back guarantee system for an online music store. My line is that as long as you haven’t scratched the mp3s or let them warp in the sun, then you can send them back for a full refund if you don’t like them.

My theory is that people will be far more likely to take a chance on something they’re unfamiliar with if there’s that safety net.

And what I’m betting on is that the degree of experimentation that may foster will more than outweigh the refunds on which I’ll be out of pocket. After all, if people want to play the system, there are actually far easier ways of finding free music…

Third, you’re unlikely to find indie rock or famous bands on Liquid Crunch. This is an experiment in specialist and niche music. I happen to like the kind of stuff that is best described as that body of recorded music the most switched-on design firms, architect offices and ad agencies tend to have playing while they work. You know the stuff.

That’s what we sell. A bit of jazz, a bit of electronica, a shake of Brazilian music and just a dash of hip hop. Soundtracks for living.

Now of course, there are things that I would like to be different about the ithinkmusic platform, and I am in ongoing negotiations with the team there.

I’d love to convince the labels that full track samples are a good idea. And I want ithinkmusic to believe me when I say that music shouldn’t auto-play, but if you choose for it to play, then it shouldn’t stop just because you browse to another page on the site. And that accepting PayPal in different currencies is important.

But all the same – I’m delighted to finally have my own record shop so I can live the High Fidelity dream. I’ll keep you posted and let you know how some of these experiments go.