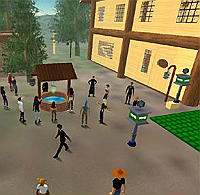 One of the most powerful things about the internet is that it encourages and reinforces communities of like-minded individuals, and amplifies word-of-mouth immeasurably. Email, webchat, IRC, Instant Messaging programmes and forums are just the tip of the iceberg. People like to talk to each other — and one of the things they like to talk to each other about most is music. I’ve mentioned Second Life on this site before, but it is rapidly becoming a mainstream phenomenon.

A year ago, this stuff was virtually unheard of (excuse the pun), but it is a logical development from text-based chats (the MUDs and MOOs of internet prehistory) and a more acceptible spinoff from the (let’s face it) failed immersive Virtual Reality project. More importantly for our purposes, Virtual Worlds are environments in which people construct their own identities, communicate and engage with people very much like themselves. A perfect environment for music to do business.

There are more opportunities for all sorts of music business (particularly for promotion and music retail) in Virtual Worlds than in just about any other context. It’s fairly new territory, and now is the moment at which these opportunities are at their best. They’re approaching the critical mass tipping point that will take it from internet curiosity to mainstream phenomenon (so the market’s already there and growing) — and hardly anyone is doing anything really entrepreneurial in there.

It would certainly be a good idea to jump right in and investigate the possibilities for your music business while this is still somewhere near the leading edge. Any moment now, it’ll more than likely be just as important to have a Second Life presence as it is to have a MySpace page. And nobody wants to be the last one into the pool…

But don’t let my preference for Second Life lead you to think that’s all it is. Like the social networking sites, there are a few to choose from, and each have their own specific demographics. IMVU and Habbo are probably both worth a look — depending on your target audience.

There have been a few good and helpful articles about Virtual Worlds in the press recently, and so I bring them to your attention:

The Next Big Thing
In case you are not familiar with MMOs or VWs, each user has an "avatar" or online representation. My daughter has, in fact, half a dozen that she varies as her mood dictates. Much of what she does in the game is not, in the strict sense, gameplay at all but simple social interaction and communication. She meets her friends at some pre-arranged location and they "chat." This is paralleled by the rapidly growing online phenomena among young people of online VW chat, such as IMVU. Yahoo has already introduced some rudimentary capabilities to their e-mail services, though they all appear to be about 16 years old. (I refuse to use an avatar that does not have greying hair and a bald spot.)

Pop music moguls home in on the hotel with 66 million guests
In the bar Bono and the rest of U2 are hosting a pub quiz for all comers, while elsewhere R&B star Jamelia holds court in her own beauty salon. Next door, teen pop sensations McFly and Shayne Ward are chatting to a throng of inquisitive fans and a new boy band is wandering the corridors trying to drum up attention. No, these are not the wild fantasies of a tabloid gossip hack, but scenes typical of Habbo Hotel, a 3D online world popular with teens which is being targeted by record companies desperate to find new ways to reach this crucial audience.

Wired News: Second Life Will Save Copyright
Businesses in Second Life are in an uproar over a rogue software program that duplicates "in world" items. They should be. But the havoc sewn by Copybot promises to transform the virtual word into a bold experiment in protecting creative work without the blunt instrument of copyright law.

BBC NEWS | Technology | ‘Worm’ attacks Second Life world
Virtual world Second Life had to close its doors for a short time on Sunday after a worm attack called grey goo. The self-replicating worm planted spinning gold rings around the virtual world, which is inhabited by more than a million users.