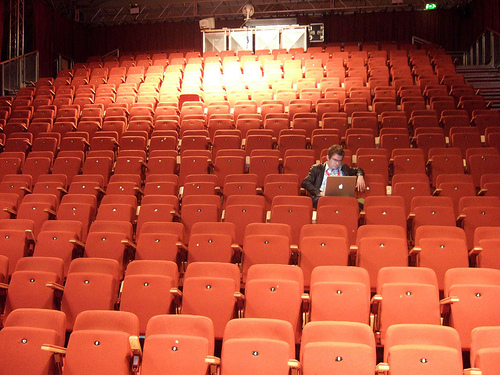 I’m currently working on a project that brings together musicians from areas of conflict around the world and has them collaborating, rehearsing and performing across the UK over a number of weeks. I’m working remotely on this project, in an advisory capacity, since I’m also currently in Brazil making a documentary film about independent music.

We have a small group of enthusiastic young people on the ground who are capturing the event using digital media – for posterity, for the blog and to communicate the project to the outside world. I’ve been asked to give some advice so that they know what to capture and how.

There are a few things to remember when you do this – some of them contradictory, so you’ll need to strike a balance. I’m assuming you have digital video cameras, audio recorders, still cameras, and something to type with. Those are your four media types: text, audio, photo and video.

Here are some tips:

– Text is harder to generate than the others – because you have to actually write it – but much easier to store and share, and more likely to be consumed than almost anything else – especially if it’s presented with an image that draws you in.

– 200-300 words is a good target. Much less than that and you’re not really saying anything. Much more than that and people probably won’t bother reading it (unless it’s a list of helpful instructions – like this).

– Don’t just write about what happens. Interpret. If somebody does something, the statement you should be completing in your head is “And what’s interesting about that is…”

– See the universal in the particular, and lead readers towards it. You can write about very small things that reveal very large things. You can’t write about very large things. For instance, the way somebody behaves in a certain circumstance might be a very small thing, but which speaks volumes about the difficulty of living through conflict and being creative in the face of devastation. You can’t say anything interesting about war, poverty or economics in 300 words.

– Tell a story – don’t just relay facts. A story has a beginning, a middle, an end and a point. A story is always about a person who does something. Normally, they face a challenge (however small), they overcome that challenge, and they learn and grow. Look for stories like that. They happen all around us all the time – and people are hard wired to appreciate them.

– Sound is really evocative. You can make podcasts, do interviews, capture the sound of something happening.

– Again, sound works really well with a still image. You can even build a slideshow featuring a series of still images and sound.

– The sound of stuff happening is every bit as interesting (often more so) as the sound of somebody talking.

– Levels are really important. Get the microphone (or your phone, if that’s what you’re using) close to the subject or the person talking. Closer than you might feel comfortable doing. About 6 inches from the mouth is ideal. People will deal with it.

– When you’ve asked a question, shut up. Let the person answer. When they finish answering, keep smiling and nodding and don’t talk. They will be uncomfortable with the silence and keep talking. People need to fill the gap – and that’s where they’ll tell you the most interesting and revealing stuff.

– Take lots of photos and only publish the best ones.

– Think about composition and light to the extent that you can – even with cameraphones.

– Try not to take a photo towards the sun. It should be behind or above you as much as possible.

– The ‘rule of thirds’ is handy to know. Don’t put everything in the middle of the picture. If you’re taking a photo of a person, imagine the frame in three vertical parts. Put them in the left or right hand one, not the middle one (it’s often good if they’re looking into the other 2 thirds). For scenes, imagine two equally spaced horizontal lines (making three equal sections) – and place the horizon on one of those lines.

– The straighter you can make a photo, the better it looks. Check your horizon and make sure it’s flat.

– Video is dead easy to capture, but requires work after the fact – so don’t shoot hours of footage. Allow 10 minutes work for every 1 min of footage you collect.

– People will only watch a video for a short time – especially if it’s in a collection of a whole bunch of stuff that’s going on. Aim for 90 seconds.

– You are not there to film a performance, but rather capture ‘what it’s like to be there’. Don’t worry about hitting the stop button during a song.

– Focus on interesting details. Don’t try to capture a whole scene. Rather, notice small things that other people might not.

– Use the same ‘rule of thirds’ that you use with photos.

– Video is always landscape mode (wide) rather than portrait (tall)

– Think about the background.

– If you’re doing a video interview, don’t just go for talking heads on the screen. The best interview question is “What are you doing now?” With a video camera, you have the opportunity to show people things.

– Don’t be afraid to play around with video. Capture unusual stuff and go close for detail. If two people are walking, then you might want to shoot their feet rather than their faces. If somebody is playing guitar, point the camera at their hands sometimes.

– There are no right tools. Whatever you have to hand is great. If you can better tools, then great. But not having a Canon 5D is not a reason to not take photos.

– If you have a smartphone, you have the tools to do text, photo, audio and video. No excuse.

– Everyone should be involved. Encourage the participants to film, interview and record as much as possible. It’s a really good idea if you can spend an hour with them getting them to make something (interview each other on video using their phone, perhaps) and uploading it. They’ll see how easy it is and want to get involved, they’ll be doing it together, and so it will feel more normal – and you’ll get some fantastic material that way.

– Let those hosting services do the heavy lifting for media data. Then you can embed onto your blog.

– You could use Tumblr for convenience, but I would recommend instead having your own hosted space with your own URL. Nobody can change the terms and conditions, you get to keep whatever you make, and you have much more control over how it looks and feels. Buy a domain name and some hosting, install WordPress, pick a theme that works for you, and post everything there.

– Back everything up. Don’t rely on the cloud. Have two copies of all of your material – unedited and in full quality – on more than one hard drive in more than one location. Offsite backup is the best way to ensure you don’t lose anything.

– Name your audio & video files something sensible. I recommend date (year, month day – in that order), title of the file and initials of person who made the piece – all lowercase (except for the initials) – and use underscores instead of spaces (not every service likes spaces in filenames). Seems long and arduous, but you’ll get into the habit quickly and you’ll thank me later. Seriously. An example of a video I made today would be: 130723-beautiful_sunset_in_sao_paulo-AD.mpg

– You should think about uploading stuff to http://archive.org as well. That way it’s preserved for future generations too.

WHAT YOU WANT TO CAPTURE

– The best advice I can give you is “capture whatever’s interesting”. That will be different to you than it is to anyone else. Give that same advice to the musicians. Once they work out that they have video cameras in their pockets, tell them “point that at whatever you think is interesting”. They will surprise you.

– Don’t try to capture performances as if you’re filming a concert for TV. Nobody wants that, and nobody will sit through it.

– The question the media you make should answer is “what’s it like to be there?”

– Look for dynamics between human beings. Tension, romance, friendship, creative sparks – anything like that. That stuff is magic – in any format: text, video, audio or photography.

– Be imaginative. You’re not there as a reporter, to collect facts or document history, but rather as someone telling a story about something that is happening in your presence. Treat it like a story. Treat the people as characters in a narrative.

– Feel free to interact with that story. Ask questions. Make suggestions. Get the musicians interviewing each other. Be playful.

– What happens around the event is as interesting as the event. Capture the road trips, lunch breaks, play time, down time and the human side of things as much as possible.