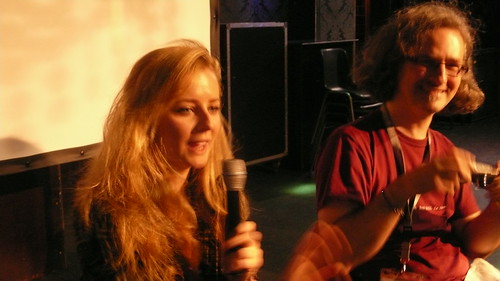 Four out of the five of us made it to Berlin for All2gethernow this past week. In fact, Andrea was one of the event’s key organisers and she did an amazing job of pulling such a brilliant event together.

It was great to see NMS friends Ruth Daniel from Un-Convention, Jason Sigal from Free Music Archive, Martin Atkins of Tour Smart fame (and some bands you’ve heard of), Zoe Keating, Mike Masnick from Techdirt, Will Page from the PRS, Dave Haynes from Soundcloud, photographer Karola Riegler, Eliot van Buskirk from Wired, Martin Thörnkvist from Songs I Wish I Had Written, David Maher Roberts from The Filter, singer-songwriter Jill Sobule, Professor Nancy Baym (off the internet), Micki Krimmel from NeighborGoods and so many more amazing and interesting people.

Talking and listening (mostly in English) 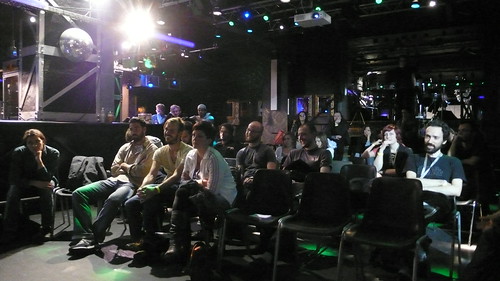 We were each on a number of panels and talked about music as culture, innovative strategies for independent artists, the importance of archives, working with music as a tool for social change, and lots more besides.

We also gave our own New Music Strategies workshops. These are our favourite things to do. Unlike a panel, where we’d talk on a topic, the NMS workshop involves us asking questions of the audience. Specifically – “how can we be helpful?”

People tell us what they’re working on, what they’re stuck with – and we do our best to help get them unstuck. We’ve done a few of these now, and they’re always fun. Some really interesting and diverse musical projects were represented, and it was fascinating to hear the things that people were trying with their music careers. 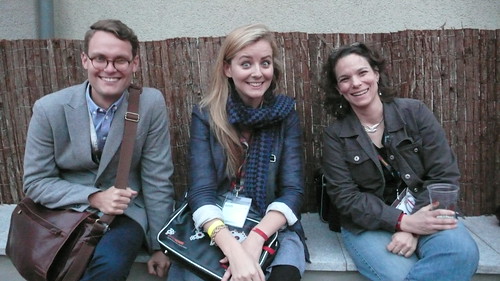 Saskia with Martin and Nancy

From what we could tell, Berlin’s a vibrant, innovative and supportive place to be making all sorts of interesting music. And of course, Andrea lives and works there – so it’s one of our headquarters.

We made a few good friends along the way at All2gethernow – some of whom we’d met on the internet, and were meeting in person for the first time – and some that were entirely new to us but have quickly become new friends.

But perhaps best of all was the chance to hang out with each other – something we don’t get to do often enough – eat some nice food, talk about music, and start to finalise plans for some very cool stuff we’ve got coming up, and that we’re going to be able to start telling you about very soon… honest.

Missing in action
The only person missing from the team was Ian, and it was a real shame he couldn’t be there. But he had more pressing concerns: he was busy becoming a father to a baby boy, who was born at 3am this morning.

Congratulations to the family!