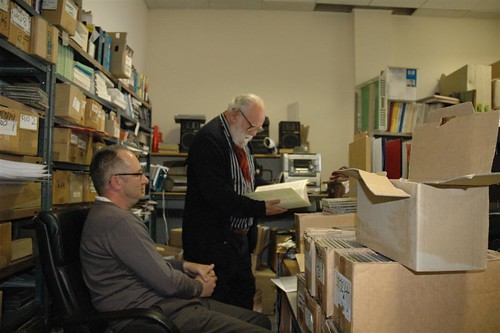 I took a trip down to London the other day with Professor Tim Wall (seated) in order to meet jazz distributor John Jack from Cadillac Jazz.

Tim is doing an extensive research project on David Murray, and stumbled across John in his investigations.

David Murray is one of the most important saxophonists in jazz music. Period. And yet, his career has been so scantly documented, it is a real work of sleuthing for Tim to be able to put the pieces together. Who he worked with — what sorts of record deals he got involved with… even compiling a comprehensive list of his recordings has been a challenge.

This is not a figure from history. This is a man I saw play live a matter of months ago. And yet tracing his career has been an archaeological task.

David Murray has released a couple of hundred albums, and Tim had been buying them from various online sources.

The discovery
One of the second hand records that he’d ordered from the US turned out to have been released on a British label. He did a bit more research and found that there was actually another record of Murray’s on that label.

Tim placed an order direct with the distributor, and recognising the name, he checked the liner notes. That distributor — John — turned out to have been the producer of the recording.

“That is the original pressing from 30 years ago.”

It had been sitting in a box in the office all that time, new and unplayed.

They had a few more conversations, and Tim arranged to go and interview him for his research project.

A life in British jazz 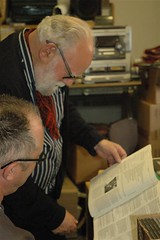 John’s been in the business a long time. He had been the manager of the original Ronnie Scott’s (“the old place”), and had some amazing archival material — including photographs, unreleased recordings and programmes from gigs (Modern Jazz Quartet and Thelonious Monk on the same bill!).

Some amazing stories, vivid pictures of a really fascinating scene, and some bittersweet recollections.

For Tim, the visit with John was a revelation. All sorts of new clues emerged about David Murray’s activities in the 1970s as he moved around Europe, recording live concerts — including a two-night booking that resulted in three albums by three different labels, all with different material on them.

In that time, Murray had partnered with dozens of different players from all over the world, recorded and performed extensively — but had left a difficult trail to follow.

The record deals he did were often flat-fee recordings. A bit of cash up front for drinks after the gig, and you can take the recording of the concert away and release it as a record. That was the deal, and as far as I know, David Murray’s still not regretting the arrangement.

Besides, the kind of businessman John is — and the only reason you’d get into this kind of work — is to do as much to help and support the artists as possible.

New strategies for old music
Most importantly (for me, at any rate), John Jack has a stash of old records he’s been selling at a trickle since the 1970s.

I had tagged along for the ride, mostly because I love jazz, but also to see if there was anything I could do about businesses like this one in the online environment.

There were hundreds of titles — some on vinyl, many on CD, and some even available on cassette only. There was a mini history of British jazz in this room, mostly sitting in cardboard boxes, on shelves and in drawers… and it wasn’t connected to the internet in any really meaningful fashion.

Cadillac Records has a website, but it’s just a catalogue with a bit of information, all put together with Microsoft Front Page (which is, so we’re clear, the devil).

There’s just so much that could be done with a business like this. The Long Tail potential — especially when grouped with other, similar businesses (and there are hundreds) is incredible. I plan to give this a great deal of thought over the next few weeks.

More than at any other time in history, there is the opportunity to connect this music with people who would love to hear it. I’m going to see what I can do to get the ball rolling in that direction. I’m also going to ferret out some other jazz distributors with back catalogue to see if we can’t make this available — so that it isn’t entirely lost to history.

While I was there, I picked up a record by Jim Dvorak — an American trumpeter based in Europe. The album’s called Joy. Mint vinyl from 1976. A really great and forgotten record — and there were only about 6 copies to be had.

This makes me happy.

BONUS: With the help of Tim and John, I am able to make some rare copies of that original 1978 pressing of David Murray’s Conceptual Saxophone available for sale.

It’s partly an initial ‘toes-in-the-water’ experiment in selling seriously Long Tail stuff — and so (of course) I’ll let you know how I get on with that.

And yes, if you buy it, I will make a small profit (to be split with Tim), and I suspect John will double his sales of that record for 2007.

And if you want to buy the absolute rarity I got my hands on, it’s here: